The Dromore 10k Run and 5k Run/Walk will take place on Saturday 9thJune following the phenomenal success of previous years. 2012 will be a special occasion as it will be part of a week of celebration as the London 2012 Olympic Torch Relaycomes through the town on Tuesday 5th June. This is fantastic for Dromore and great timing for the annual road race to celebrate athletics and fitness in this momentous year.

The Olympic flame leaves Northern Ireland for Scotland on 7 June and arrives in Belfast June 3 2012 from the Isle of Man. 7,300 of the 8,000 Torchbearers have been announced including the 2 through Dromore - Roisin Lynch and Stephen Doherty. It will arrive in Dromore at 10.52am on Tuesday 5th June. The community are coming together to celebrate by decorating the town, having ‘Olympic Try it Days’ for children and coming out in force to greet the Torch. 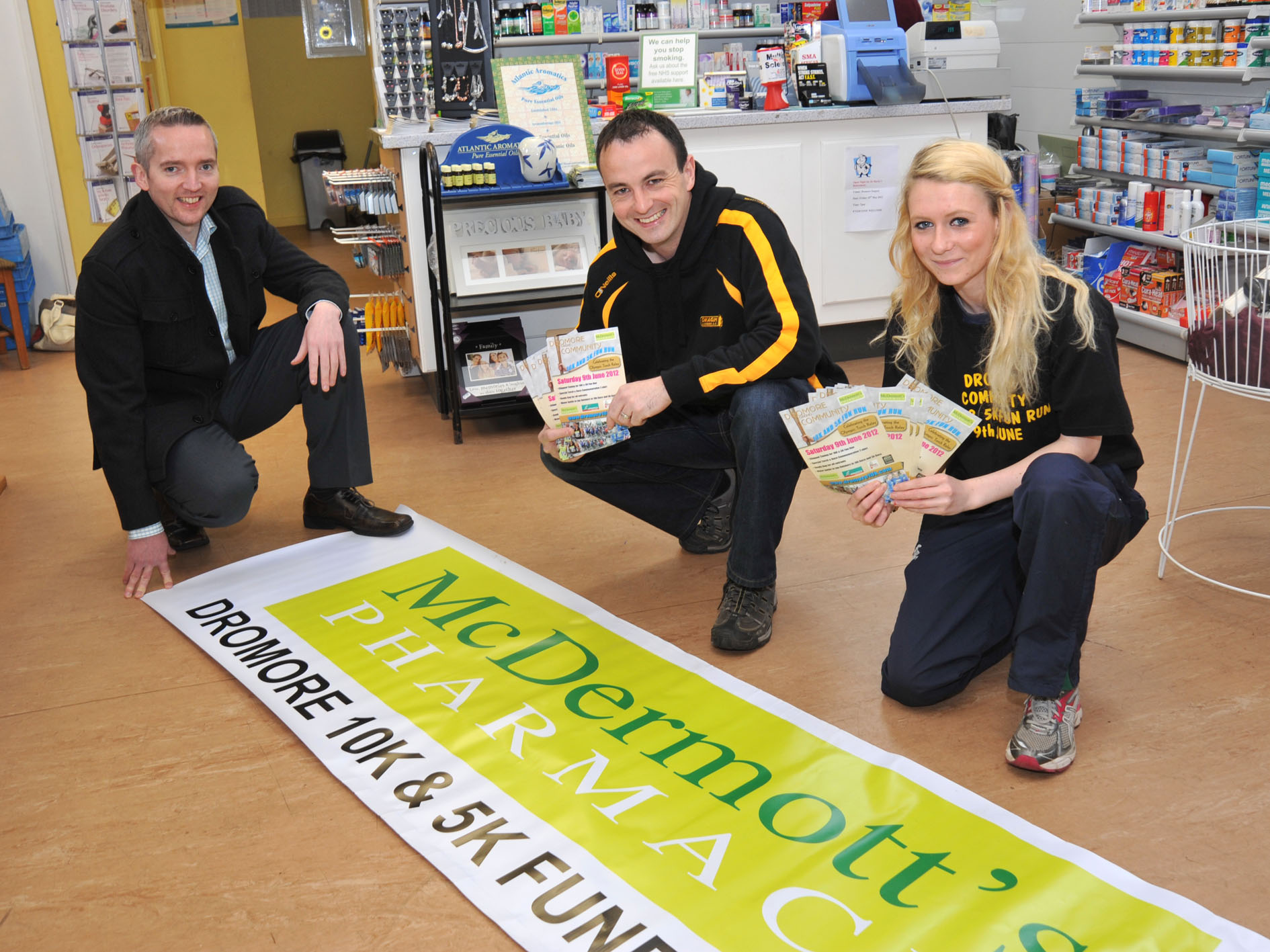 McDermott’s Pharmacy have come on board as title sponsors once again, realising the benefits of being  involved in such a significant year. The business based in Church Street has been there since 2007 and on top of dispensing of medicines they offer a medicines management service, repeat dispensing and free prescription collection and delivery.

Bernard Maguire from the Pharmacy said: “I am delighted to have the opportunity to be the main sponsor of the Dromore 5 & 10K race once again. It's a great event which the whole community has embraced and is now a firm fixture on the events calendar for Dromore. It appeals to a wide range of fitness levels and the social aspect is fantastic, there already are a few local runners meeting up three or four times a week in association with our Dromore Fit Factor initiative.

The day itself can be enjoyed by young and old and it helps to promote the link between the pharmacy and staying active and the obvious health benefits which are associated. For everyone getting involved this year just remember the second most important thing to remember after choosing the right shoe is to choose the left”.

The Dromore Run is now recognised as one of the best and well supported in the area and this will also be part of the finale of Fit Factor’– an exercise initiative which is sweeping the town! Fit factor is an 8 week programme aimed at encouraging exercise for life for everyone in the community-young and old, fit or otherwise. It is a fun filled, exciting and value for money programme suitable for all abilities- with over 40 activities per week there’s definitely something for everyone.

Over 600 people took part in the road race last year permitted by Athletics NI and 2012 looks to attract even more with a special commemorative torch t-shirt, updated prize structure and water bottles for the top finishers.

Helping launch the event was Chairman of Omagh Harriers and local resident Gavin Winters along with their top local runner Sara Moore. Sara, who is Irish Schools 3000m champion, won the 5K event last year but will step up to the 10K event for 2012 in the hope of taking a top position. Her brother, who recently ran a useful 4.16.50 1500m and will also be hoping to feature highly in the 10K race won by Steven Duncan in 2011 (32.11). First female home was Julie Butler (Omagh Harriers) in 39.48. (See 2011 Results)

Proceeds from the event will be donated to the Dromore Sports Complex to be used for new equipment and also to go towards the staging of a Dromore Community sports day in September.

Entries have already started coming in on the online system. It is advisable to apply now before the closing date of Friday 1st June to secure your t-shirt and to avail of the cheaper entry fee.

For full information on the race and also the Torch Relay visit the dedicated website www.dromore10k.com and to enter online at www.athleticsni.org.


[Title and Silver sponsors have been snapped up quickly. Anyone interested in sponsorship should contact Dermot Montague on on 82 898213 or email marketing@athleticsni.org.]