Posted by on Sunday, June 14, 2015 Under: Road Race
A new start time of 12 noon is the main change for the 2015 Dromore 10K and 5K Run/Walk which will take place on Saturday 27th June in what will be the town’s seventh year at hosting this cross community event. A new route was introduced in 2014 and the 10K has less hills to battle and both races (10K & 5K) run along the picturesque ‘Riverside Walk’ with a finish through the centre of the town.
McDermott’s Pharmacy have returned for their fifth year as title sponsors and are celebrating their recent move to a new premises on Main Street Dromore.
Bernard Maguire said: “McDermott's Pharmacy are privliged to be involved over the last five years with the Dromore Road Race. Locals really look forward and get involved in the event each June and we are delighted to pen our new pharmacy just a few strides away from the start line on the Main Street”.
The local organising committee are urging runners and walkers from the town as well as neighbouring villages to come along and enjoy what has become not only a competitive fixture in the athletics calendar but also a great family day out. In previous years the athletes have come from Clones, Lisburn , Belfast and Derry.
Stephen Duncan (Omagh Harriers) has dominated the 10K rostrum taking the top position every time he has turned up and is looking like he is unbeatable over this challenging course. He had clubmate Paul Barbour breathing down his neck in 2014 but still took top spot in a time of 33.28. With Barbour unavailable for 2015, maybe some new faces will take the top three places. Local Eddie Molloy and also one of the key sponsors (Molloy Butchers) would like to improve on his impressive top 10 finish last year.
Female favourites would have to be Patricia O'Hagan (St. Peter's AC) who won in 2014 in 38.46 but would face a challenge from Sperrin Harrier's Pauline McGurren who won the Killyclogher 10K recently and stalwart Julie Butler (Omagh Harriers).
The 5K race is usually dominated by Omagh Harrier juniors with Conor Moore winning in 2014 in 18.17. It was great to see Alexandra Kirk from Springwell RC take the girls 5K win after travelling quite a distance to take part.
Local Dromore runners Mark O'Donnell (Molloy Butchers) and Michelle McMackin (McMackin Conracts) were present at the launch and looking forward to the challenge of a new PB since they have competed every year.
Veteran prizes are for the 10K race for male and female runners for O35, O45 and O55 categories.
Entries have already started coming in on the online system. It is advisable to apply now before the closing date of Monday 22nd June to secure your t-shirt and as after this late rates will apply.
Numbers and late entry will be available at Dromore Sports Centre on Fri 26th (6-8pm) & Sat 27th June (10am - 11.30am).
For full information on the race visit the dedicated website www.dromore10k.com and to enter online at www.athleticsni.org. 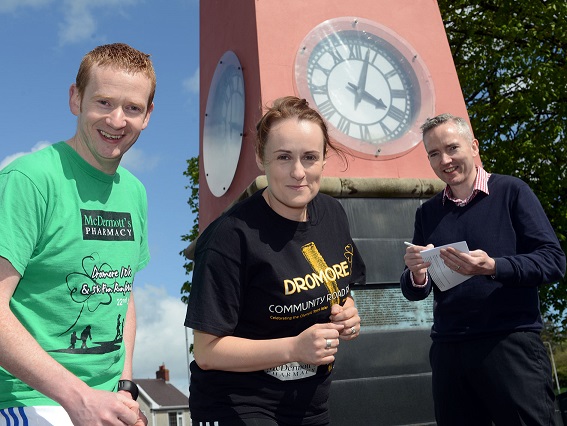 Bernard Maguire of McDermott's Pharmacy are on board again for the Dromore 10K and 5K Road Race along with fellow sponsors Mark O'Donnell (Molloy Butchers) and Michelle McMackin (McMackin Contracts) at the Dromore clock.